What are Immunobiotics and Immunoceuticals? Are these available for Lung & Respiratory system performance as well?

The word ‘immunity’ and its derivatives have sprung into importance, thanks to once-in-a-millennium pandemic. Immunobiotic is one such term. As complicated or medically complex as it may seem, it is actually quite a simple concept. The term ‘immunobiotic’ refers to microbial strains that can regulate human immune system in a favorable way.

In other words, probiotics, which have specific, proven properties to beneficially modulate our immune system, are referred to as immunobiotics. Not all probiotics are immunobiotics, only few are!

We’ve seen a lot of progress in the application of immunobiotics to treat infections in recent years, and researchers have discovered that using helpful microorganisms to prevent and reduce the severity of illnesses in humans is an intriguing alternative.

The mechanism of how these immunobiotics exert their beneficial role, has been extensively studied. Immunobiotics beneficially modulate the intestinal activation of toll-like receptors (TLRs) and pattern recognition receptors (PRRs), which significantly alter the ‘immunotranscriptomic’ response of intestinal epithelial cells, causing an increase in type-I interferons and antiviral factors as well as a differential modulation of cytokines, chemokines, and adhesion molecules.

The single most crucial aspect in this whole mechanism is the fact that 70% of our immune system lies in our gut!

Immunobiotics have been shown to have a significant impact on the gut’s innate and adaptive immune responses to enteric infections. However, immunobiotics’ impact on immune responses at distal mucosal regions, as well as their impact on the outcome of respiratory infections, has recently been revealed. In this regard, some investigations have shown that beneficial microorganisms can improve antiviral immunity in the lungs. Today, we know that a healthy gut confers healthy immunity to organs and systems far outside the gut! The converse, is also true. Unhealthy gut destroys healthy immune system of not just the gut, but faraway organs like lungs.

On the other hand, Immunoceuticals are nutraceuticals that have a positive impact on immune function. An ‘Immunoceutical’ is a substance that can be regarded as a food or a component of food that has medical or health advantages, including illness prevention and treatment, primarily by beneficial modulation of our immunity. Nutraceuticals can comprise everything from isolated nutrients, nutritional supplements, and diets to genetically altered ‘designer’ foods, herbal items, and processed meals (cereals, soups, and beverages). Again, not all nutraceuticals are immunoceuticals, only a few are! 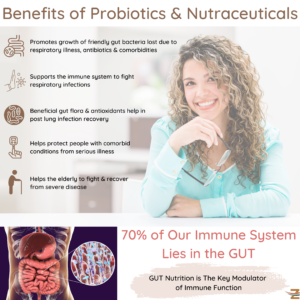 Are Immunobiotics available for Lung & Respiratory system performance as well?

Latest research has unambiguously established the role of immunobiotics in lung health.

For example, several studies published in the recent decade have shown that microorganisms with the ability to influence the mucosal immune system (immunobiotics) are a viable option for improving the outcome of Influenza virus and a host of other related respiratory infections. Initial researches proved the role of humoral immunity in orchestrating the beneficial role of immunobiotics. Immunobiotics increases humoral immune response by modulating the generation of systemic and mucosal antibodies against respiratory pathogens.

Immunobiotics have also been shown to increase respiratory innate antiviral defences in the respiratory tract.

The beneficial role of immunobiotics is not just restricted to infections alone. Research shows that specific immunobiotics and immunoceuticals has a profound impact on lung and respiratory health for people suffering from a plethora of lung related disorders like asthma, COPD, pulmonary fibrosis and lung cancer.

Are you seeking the finest supplements for lungs, breathing, and clearing your airways?

You might be wondering if your lungs can be cleansed and detoxed. Yes, you can – with some restrictions, of course. Although the greatest ways to cleanse your lungs are natural, there are some vitamins and supplements that may be beneficial.

In order to keep a healthy lung, it is critical to take care of our gut health. The immunological response of our bodies is influenced by changes in gut bacteria composition. As mentioned earlier, our gut contains 70% of our immune system. Lung diseases are caused by a faulty immunological response. Lung problems, in turn, wipe off beneficial microorganisms in our intestines. According to scientific evidence, a healthy combination of helpful probiotics, prebiotics, and lung-specific nutraceuticals helps our bodies better manage lung diseases. 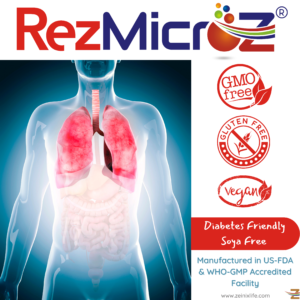 RezMicroZ is a new mix of specific Immunobiotics and Immunoceuticals that aids in the correction of inflammatory imbalances and the improvement of respiratory function. RezMicroZ’s unique blend of Immunobiotics aids in the restoration of gut microbiota balance, which is disrupted by various lung ailments such as asthma, COPD, Covid-19, interstitial lung disease, chronic lung infections, lung cancer, pulmonary fibrosis, and cystic fibrosis, and thus aids in lung health restoration.

Experts hand-selected the components, which are known to have powerful immune-modulatory, anti-inflammatory, anti-oxidant, and immune-boosting qualities, as well as anti-infective and anti-thrombotic properties. RezMicroZ provides our bodies with the best possible chance to fight, recover, maintain health, and protect against a variety of lung diseases.

Tags:
Immunobiotics, Immunoceuticals, What are Immunobiotics and Immunoceuticals
Facebook Twitter linkedin WhatsApp WhatsApp
Newer Finally, there is a revolutionary supplement for patients suffering from lung diseases!
Back to list
Older What supplements can I prescribe for my patients who had COVID-19